The Matter With Things 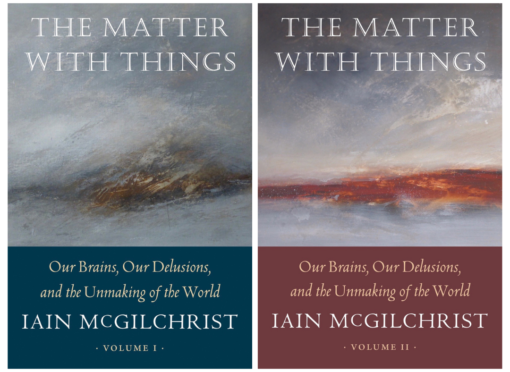 ‘This is the most extraordinary book. It’s got evidence on every page of a mind that is stocked so richly and has meditated so long and so clearly on the most important subject we can face. I can’t recommend it enough: it’s an astonishing book, that will change many, many people’s lives.’

– Philip Pullman, speaking at the How To Academy, 9 November 2021

(Philip Pullman nominated The Matter With Things as his Book of the Year.)

From the author of the widely acclaimed The Master and his Emissary: The Divided Brain and the Making of the Western World (over 100,000 copies sold worldwide).

> Or here for deliveries outside of the UK.

‘I loved The Master and his Emissary: this is even deeper.’

In this landmark new book, Iain McGilchrist addresses some of the oldest and hardest questions humanity faces – ones that, however, have a practical urgency for all of us today:

In doing so, he argues that we have become enslaved to an account of things dominated by the brain’s left hemisphere, one that blinds us to an awe-inspiring reality that is all around us, had we but eyes to see it. He suggests that in order to understand ourselves and the world we need science and intuition, reason and imagination, not just one or two; that they are in any case far from being in conflict; and that the brain’s right hemisphere plays the most important part in each. And he shows us how to recognise the ‘signature’ of the left hemisphere in our thinking, so as to avoid making decisions that bring disaster in their wake.

Following the paths of cutting-edge neurology, philosophy and physics, he reveals how each leads us to a similar vision of the world, one that is both profound and beautiful – and happens to be in line with the deepest traditions of human wisdom.

It is a vision that returns the world to life, and us to a better way of living in it: one we must embrace if we are to survive.

Praise for The Matter With Things

‘It’s very simple: this is one of the most important books ever published. And, yes, I do mean ever. It is a thrilling exposition of the nature of reality, and a devastating repudiation of the strident, banal orthodoxy that says it is childish and disreputable to believe that the world is alive with wonder and mystery. For McGilchrist the universe is a constantly evolving symphony – a gradual unfolding of an epic story. We urgently need to attune our ears to this music – to re-enchant the world and ourselves, and to confound those who say that there is only noise.

No one else could have written this book. McGilchrist’s range is as vast as the subject – which is everything – demands. He is impeccably rigorous, fearlessly honest, and compellingly readable. Put everything else aside. Read this now to know what sort of creature you are and what sort of place you inhabit.’

– Professor Charles Foster, Oxford University, author of Being a Human and Being a Beast

‘The Matter with Things is a work of remarkable inspiration and erudition, written with the soul and subtlety of a poet, the precision of a philosopher, and the no- nonsense grounding of a true scientist. In its pages, neuropsychology comes into conversation with philosophy, physics with poetry. Its author shows not just how our divided mind and brain makes us human, but how this gives us the potential both to understand and to misunderstand the world.

Iain McGilchrist’s book considers both great sources of awe and admiration: the starry heavens above as well as the mental life within. The author first offers intertwined analyses of brain function, cognition, and the structure of knowledge. Then he climbs his three-fold cord to a place from which one can survey the ultimate mysteries—the relationship of mind to matter, the concept of life, the contested role of purpose in the universe, and the nature of the sacred. McGilchrist is the most generous and talented of writers: his fluid account, brilliantly and beautifully argued—and meticulously researched—brings us along with him, step by step, until we too can discern the horizons of a reconfigured world.

McGilchrist’s appreciation of ambiguity and paradox only enhances the clarity and vitality of his thought. This is a book of surpassing, even world-historical ambition, and—still more rare—one that delivers on its promise.’

– Louis Sass, Distinguished Professor, Rutgers University; author of Madness and Modernism and of The Paradoxes of Delusion

‘A magnificent achievement. The Master and His Emissary, Iain McGilchrist’s earlier tour de force, ranks as a game-changer. It doesn’t so much undermine common understandings of rationality as reframe them. The Matter with Things builds on that foundation, confirming the author’s status as a leading contemporary polymath. With rarely matched clarity as well as deep learning, McGilchrist demonstrates not just that there is more to the world than matter, but also that there is more to matter itself than grasped by the shallow materialisms of our age.’

‘If we draw only on the left side of the brain, our culture paints a narrow picture composed via the hyper-specialism which bedevils contemporary intellectual life. In this sorry state, we badly need that now-almost-vanishingly rare personage, the true polymath. In Iain McGilchrist, in the nick of time, we have one. In this book, he draws quite magnificently on his post-disciplinary erudition precisely to explain how very much we lose when we draw only on the left hemisphere.

If you want to understand why curiosity is in vogue but wonder is not; or why we aim directly at happiness and in doing so ineluctably become less happy; or why we like to talk about ‘the environment’ while Nature, upon which we utterly depend, we quietly desecrate; if you yearn to comprehend and question the rise of a desperate clinging to ‘identity’ within both the Left and the Right of politics; or if the way our civilisation tends to model human beings as machines disturbs or hurts you, then please read this book; for it sheds a profound light on these and so many other literally vital questions. If it were widely heeded, then perhaps, even at this late hour, our civilisation’s merry march to a slow and brutal suicide might be halted. For this book is that most valuable of possible books: The Matter With Things is nothing less than a work of genius, diagnosing our dire predicament in full, and offering a way, instead.’

– Rupert Read, Professor of Philosophy, University of East Anglia; author of Wittgenstein’s Liberatory Philosophy, This Civilisation is Finished and Parents for a Future.

Iain McGilchrist is a former Fellow of All Souls College, Oxford, an associate Fellow of Green Templeton College, Oxford, a Fellow of the Royal College of Psychiatrists, a Fellow of the Royal Society of Arts, a Consultant Emeritus of the Bethlem and Maudsley Hospital, London, a former research Fellow in Neuroimaging at Johns Hopkins University Medical School, Baltimore, and a former Fellow of the Institute of Advanced Studies in Stellenbosch, who now lives on the Isle of Skye, off the coast of North West Scotland, where he continues to write, and lectures worldwide.

He is committed to the idea that the mind and brain can be understood only by seeing them in the broadest possible context, that of the whole of our physical and spiritual existence, and of the wider human culture in which they arise – the culture which helps to mould, and in turn is moulded by, our minds and brains.